Traditional restaurant style falafels — made at home! These falafel patties are super easy to make at home and are loaded with traditional flavors like sesame seeds, tons of parsley and a hint of cumin. Stop paying for falafels when you can make them at home! 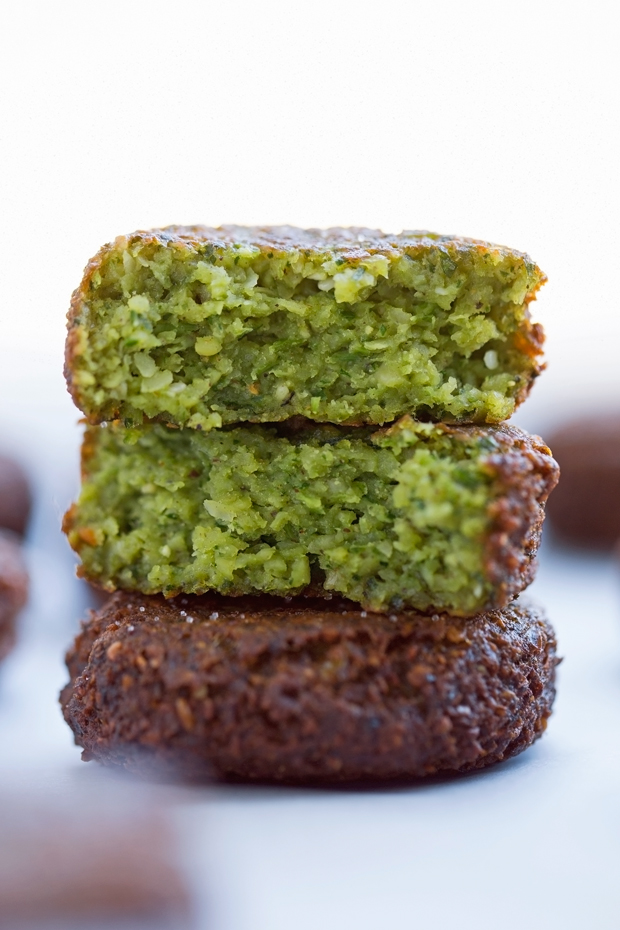 Homemade Falafels. That’s it, scroll to the bottom, grab the recipe, make them. Goodbye, so long, farewell! Okay, just kidding. This isn’t really goodbye. But you don’t need me to say much more when homemade falafels are involved. The urge to make them kinda just rises inside all on it’s own.

So did you watch it? The Super Bowl. What did you eat? I hope chips and guac were part of your Sunday. What did you think of the halftime show? Am I the only one that thought it wasn’t all that? Yeah, seriously. I kinda thought Katy Perry was better last year.

Calling all falafel lovers. Is there anyone not answering this call? ???? I used to be from your lot <– and by your ‘lot’ I mean I wasn’t always all on board with the falafel train. But before you give a loud gasp — let me say that before some time ago, I had never really had great falafel. And by great I mean, falafel that I didn’t have to wash down with a large bottle of coke because it was so dry it could cause my esophagus to explode. But then just like that the world righted itself one day, and another falafel lover was born. ❤️❤️

I’ve just been waiting for the right time to share my falafel recipe with you. A big chickpea fritter loaded with flavor and completely meatless. And when I say waiting, I seriously mean that i’ve been hoarding and borderline over recipe-testing them to make them beyond perfect for you. But really, we all know it’s because I can’t get off the falafel train.

Loaded with onions, garlic, parsley, chickpeas, and hints of cumin, coriander, and cayenne. These falafels gives you a little teeny tiny kick in the rear that just heats things up a tad bit. And it’s as simple as tossing a bunch of ingredients into the food processor and pressing a button to give it a good whirl. I seriously debated on calling this a spicy falafel recipe, but in the end I decided against it as it’s easily customizable from both heat lovers and non heat lovers alike.

And about those chickpeas. The actual ???????????????????? of the show. If you wanted to make falafels today, you need to have soaked the chickpeas last night. Um.. so a good 12-24 hour soak is mandatory. Sorry to break it to you friends. But good things are worth the wait, AMIRIGHT? 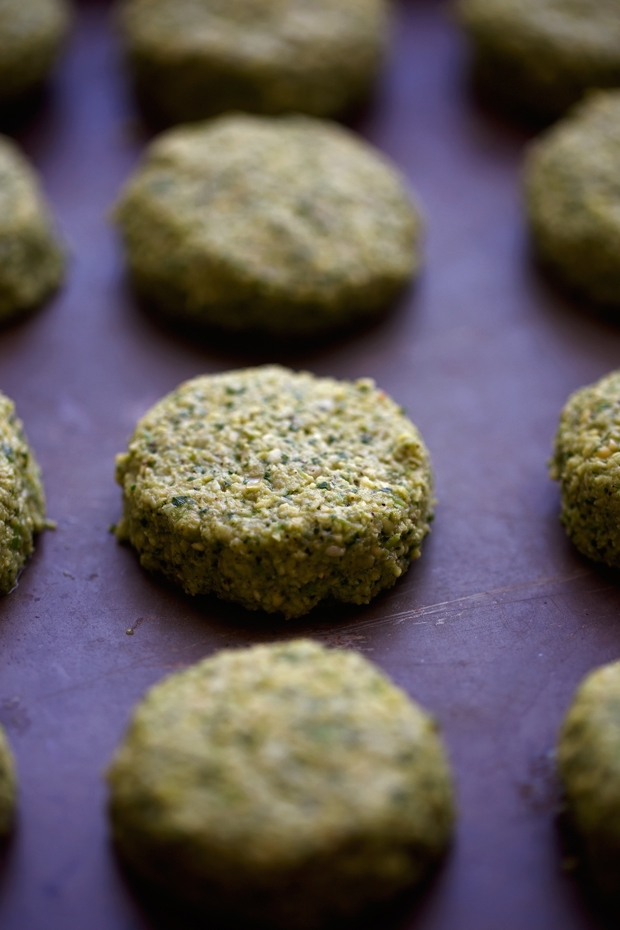 BUT. Before you go running off on me, let me say that though this recipe requires a little preplanning, the rest of the recipe is super easy to put together. As in blend –> make patties –> fry them off in a skillet with just a bit of oil. I’ve made baked falafels before but really, sometimes (in moderation) the real thing is what you really need. But! Instead of deep frying these guys, i’m making patties out of them and frying them in a skillet which kinda in my brain means they soak up less oil. I’m telling myself that and don’t you let me think about it any other way!

And while we’re on the subject of patties, you don’t have to make them flat the way I did. You can make them in the traditional round hushpuppy-like shape if you wish. But a major benefit of making patties is that it’s super easy to stuff them in naans to make falafel naan-wiches. And I’ve got a buddha bowl salad that features these falafels coming up too. 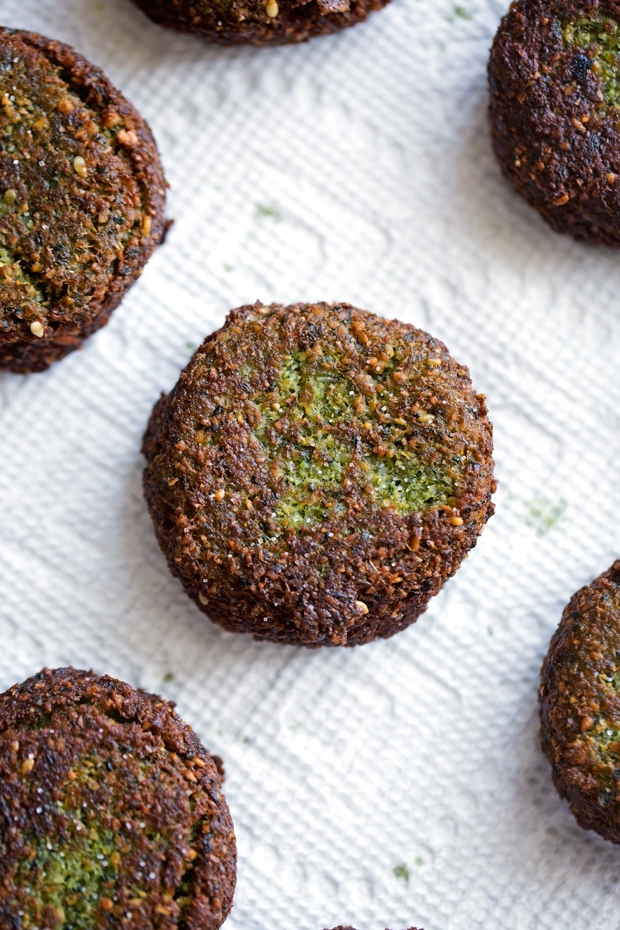 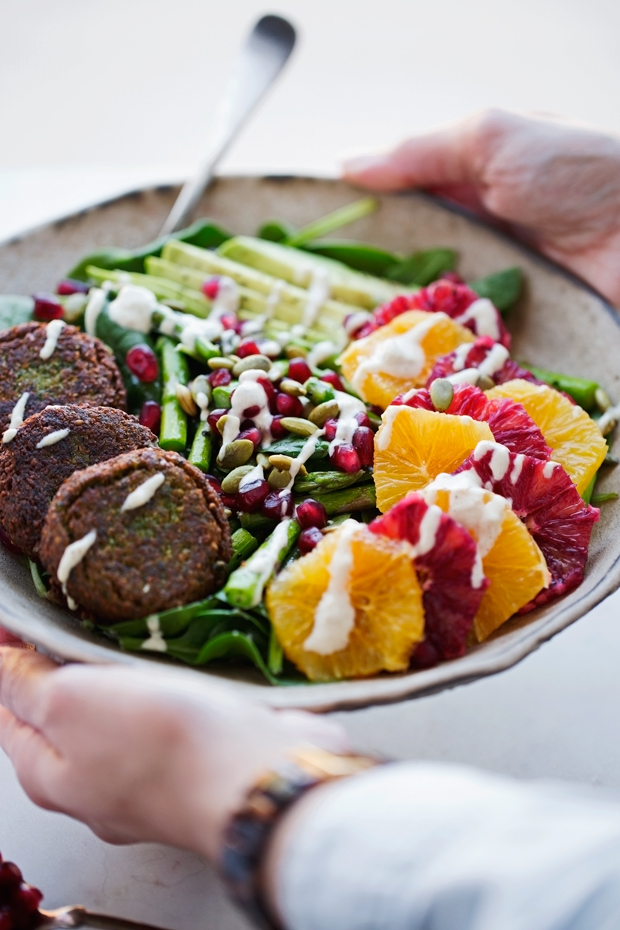